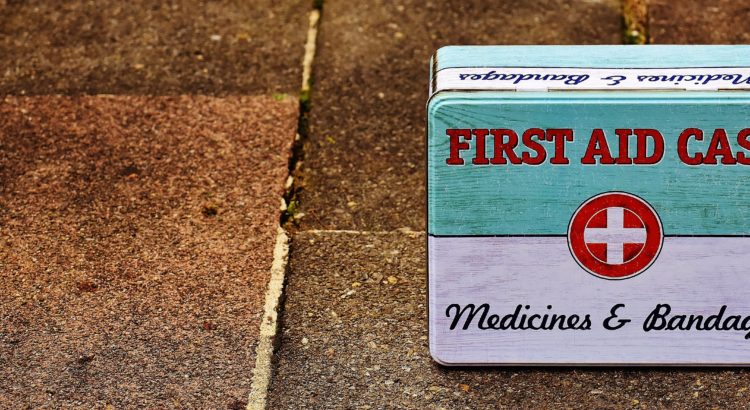 I’m often known as the mobile pharmacy when I travel, because I make sure I have a good basic medical kit with me at all times. Mine is actually pretty small, as I don’t have any pre-existing conditions and have therefore discovered that I can usually get what I need even in the most basics of pharmacies worldwide. The following is therefore a very basic kit that I use on shorter trips or to start me off in an emergency so I can get to a clinic or a pharmacy and get whatever it is I need. It’s a good starting point if, like me, you are healthy and don’t suffer from any medical conditions or allergies.

As with all things you read on the internet, keep in mind that I am not a doctor and have zero medical training. I am telling you what works and has worked for me, anecdotally. You’re meant to always consult a doctor before taking any medication or supplement and I suggest you do that before following the advice of anyone who’s not a medical professional (including me). Let’s call the below “general interest information” rather than medical advice and all be responsible adults about it, OK?

What’s in your kit should depend on where you’re going and your own medical needs. If you’re going on a city break to somewhere big and modern, you can easily get most things there if you have to. Still, it’s good to have some things on you to save you an annoying search when you’re feeling low.  Obviously, your prescription medications should always be with you (with the physical prescription, too), as well as anything to treat stuff you know you occasionally suffer from (such as allergy medication if you know you get allergies often, an inhaler if you occasionally or even rarely have asthma attacks, etc.). For example, I know I’m prone to ear infections, so I always have ear drops in my kit. For longer trips to more challenging areas, think about things that can and do wrong for you specifically and pack accordingly. You never know whether that medical condition that gets you once in a blue moon is going to be triggered by something in a foreign country where treatment is not immediately available.

Things I pretty much always have on me

Seriously. Don’t even think of ever travelling anywhere without one. It’s not part of your medical kit, but it should be part of your overall travel planning. It’s so cheap to have now and it will save you so much hassle if you end up sick on your travels. You can even get backpacker and expat travel insurance now that will cover you for very long trips. I rarely see a doctor and I’ve never really had to use mine, but it’s there, because the alternative if anything does happen is a pain in the ass.

It doesn’t matter where in the world you are and how many shops there are around you. As a solo traveler, especially, you never want to be in a situation where you are in pain and have to go looking for something to make that pain go away. In most countries you can get ibuprofen or paracetamol pretty much anywhere, but having some on you will make it easier to go find some more if you need any.  I usually carry a small pack of Advil or something similar on me, because ibuprofen is pretty much universally available over the counter. This is important, because some countries (namely UAE and specifically Dubai) routinely lock up tourists for possession of medicine that’s sold over the counter in other countries. If you’re going to be packing any painkiller that isn’t your basic paracetamol or ibuprofen and don’t have a prescription for it that you will carry with you at all times, make sure you read up on the laws in your travel destination before you go so that you don’t accidentally end up with a controlled or illegal substance in your bag.

Ever since I discovered that probiotics work just as well to cure most (if not all) bacterial stomach bugs, I always carry some on me. Get the strongest ones you can find that don’t require refrigeration. We’re talking those that are something like 10 billion+. I don’t take them daily while I travel. I save them for the first sign of food poisoning or a bad stomach and then I down a few (2-4) at the same time and wait. If the problem hasn’t gone, I take one or two more. Usually, the bug goes away after that. Some stomach bugs are not caused by bacteria, so this won’t be an effective way to treat them. I found this out the hard way when I had an amoeba and did need to get on antibiotics. Obviously, if you’re ill for more than a couple of days or are at risk of high fever, dehydration or anything else that can actually kill you, get yourself to a doctor ASAP. This is where Information You Read On The Internet stops being useful.

As an aside, I also find probiotics useful for when I go somewhere with food I’m not used to (like when I’m getting used to the ultra-rich food in the US). I take one capsule a day till I adjust.

If I’m going to be travelling for a while and in places where vegetarian food may not always be available, I’ll make sure to have a good supply of multivitamins and anything else I think I may otherwise be short of.

Hot, tropical countries are notorious for giving women UTIs and apart from ruining your holiday by making you miserable, these can also end up in a nasty bladder or kidney infection. The joy of UTIs is that you can pretty much get them anywhere and the thing with UTI treatment is that if you want to avoid antibiotics it’s best to start treating the infection as soon as you feel the first tingle. It’s best to have something on you so you don’t have to run around looking and stressing.

The cystitis relief sachets are available over the counter in most countries and if you start mixing them with water and drinking them according to instructions at the first sign of trouble, you’ll be good to go in no time. Alternatively, if you didn’t pack any or none are available where you are, you can buy baking soda (bicarb of soda) and mix a teaspoon in a glass of water. Drink every hour until symptoms go away. This is not as effective as the proper sachets, especially if you’ve left it too long to start the treatment. If symptoms don’t go away in a few days, see a doctor for something stronger.

Because blisters and cuts happen no matter where you are. I now have one of those fancy antiseptic creams from the States that has antibiotics in it and stuff like that, but I generally try to find something that says it’s good for everything from cuts to mild burns.

If you’ve got a stomach bug and absolutely have to travel, this is your best friend, as it will usually stop or slow down diarrhea. If you don’t have to travel, it’s best not to take it, as you want whatever is in you to be flushed out. I have, however, been given it in hospital once when I was at risk if dehydration, but it’s best to let a doctor decide that.

A pack of little sachets of electrolytes can keep you away from dehydration when you’ve got a stomach bug or when you’re in a hot country and are not used to drinking enough. Also doubles as a decent hangover cure.

I don’t usually pack it for city breaks or trips anywhere with shops, because it’s pretty much available all over the world, but a small bottle of it can be handy. The anti-dandruff stuff in it can be useful for treating a variety of fungal infections in an emergency. So if you suddenly find yourself with anything from a rash to a fungal skin infection to mild thrush and no access to better treatment, you can use that until you get something better. As always, as I’m not a doctor, ask a real doctor before trying anything, especially if you have or think you might have sensitivities or allergies.

I stopped using tampons over 10 years ago and now use a MoonCup which is much better for the environment (especially if you’re backpacking in third world countries), much cheaper and a lot less hassle to deal with once you get used to it. However, as evangelical as I am about the various cups around, I know they’re not for everyone, so you will probably want to pack your own supply. Don’t count on there being tampons everywhere you go, especially your favourite brand of tampons. Plan ahead and bring them with you.

Because there might not be any around when you really need them. Even if you are on the pill, the sort of sex you have on holiday is probably the type you want to be safe sex.

Because that’s the other common, annoying thing you can easily get on holiday.  If you think you won’t be able to get these where you’re going, pack your own. Like with the painkillers above, check the laws in your destination country to make sure the stuff in your medication is not a controlled substance there.

I don’t go trekking and my first aid skills are limited to nonexistent so I don’t carry a properly stocked first aid kit, nor am I going to pretend I have any real idea of what would go in it.

If I’m going to be somewhere vaguely remote, though, or plan on doing anything active, I’ll bring my plasters and antiseptic cream listed above, as well as alcoholic wipes and bandages. Burn cream is also very useful. You can usually get a little first aid kit that will already have most if not all of that in it.

This can be useful. I say this as someone who once tried to learn how to ride a Yamaha Classic bike in Goa and still carry the massive third degree burn scar *cough* years later.  That said, I generally think that unless you’re heading off into the wilderness, having enough kit to bandage yourself up once or twice so you can go to a pharmacy or clinic and get more supplies and professional care is good enough.

If this is something you tend to get, packing a small tube of something like Bonjela (what we have in the UK) can save you some unpleasantness. Alternatively, dabbing the ulcer with a bit of vinegar a few times a day will do the trick.

Because you really don’t want to be caught out in mosquito country having forgotten to go to the chemist / pharmacy before they shut for the night. Gently rubbing vinegar into mosquito bites will make the itching go away, but as mosquitoes carry all kinds of nasty things in a whole load of countries, it’s best to make sure you don’t get bitten in the first place.